The Living Green Walls at the ARK in Berea Eco-Musem 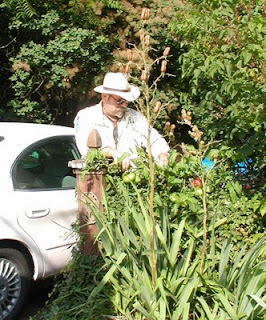 THE PIONEER IN MODERN URBAN GARDENING

ARK in Berea Eco-Museum - Green architects are now moving into designing living green walls -- think a vertical garden on the wall of a building -- as green roofs and urban gardening become more common stream. The ICEALITY incorporated in these walls help cool the buildings in the summer (reducing solar heat), insulate the building in the winter, water management (reduced storm water runoff for growth), and have the potential for helping feed the people (think vegetables, herbs....).
The living wall offers a real benefit in rain water mitigation, offering the potential for reducing the burden on storm sewers and, down the line, pollution into water systems. And, the green vegetation provide a cooling effect in summer. And, part of the ARK in Berea’s overall environmental impact on climate change -- the 25 year old “living wall” increase greenery while improving the air.

There are two main categories of green walls: green facades and living walls. Green facades are made up of climbing plants either growing directly on a wall or, more recently, specially designed supporting structures. The plant shoot system grows up the side of the building while being rooted to the ground. In a living wall the modular panels are often comprised of polypropylene plastic containers, geo-textiles, irrigation systems, a growing medium and vegetation.

As shown in reports from the US Network for EXPO2000, a project of the International Center for Environmental Arts (ICEA), urban population growth is not a sustainable option. Arne Dunker, manager of the Klimahaus in Bremerhaven states, "I remember having a discussion about whether it's a good idea to teach people that mankind is part of the global climate problem....this was way back in 2000 during the EXPO 2000 Worlds Fair in Hanover, Germany, this was a very controversial situation then, but today there’s no question that mankind contributes a lot to the climate problem."


Green buildings are now an essential constituent of urban quality of life. It is noteworthy, however, that some cities have been more successful in implementing a green building policy than others. One consideration is geography, the insulating implications of five or six inches of soil might not be critical in modern super insulated buildings, but most buildings in temperate climates, are unlikely to have R-40 or so in the walls. Thus, an additional factor is the interesting question of back fitting opportunities in some cities. Vertical walls could be relatively easy retro-fitted onto many buildings and many homes around the world. And they might offer the potential for significant energy savings along with fresh vegetables for the dinner table.
Greener buildings are supposed to revolutionize the way the nation's built environment operates chiefly by using less energy. Seeing as U.S. commercial buildings account for about 30 percent of carbon emissions, according to the U.S. Green Building Council, improving the performance of the built environment is a key focus of all green building rating systems. But the green building industry has a dirty little secret: Until recently, few people really kept track of how so-called "high-performance buildings" were actually performing. The iconic Cleveland architecture of the ARK in Berea Eco-Museum pre-dates the U.S. Green Building Council and its LEED certification program.

The main driver for green buildings in the United States is the U.S. Green Building Council's Leadership in Energy and Environmental Design (USGBC-LEED) rating system. LEED-certified buildings, at the basic Certified level, are designed to use 30 percent less energy than buildings built to standard code. It would make sense to assume that LEED-certified buildings at all levels do in fact perform as advertised.

"We're not seeing the true performance we might have expected [out of LEED-certified buildings]," says Jared Silliker, owner of Silliker + Partners, a green building-focused consulting firm based in Seattle.

Unfortunately, in practice, incorporating commercial "green roofs" is used by businesses more as a public relations pitch aimed at the general population who don't know any better. "Green" roofs actually require an extraordinary amount of precautionary measures from water proofing to specialized drainage to additional structural fortification to support the extra loads. By the time any savings from lower cooling costs are finally realized, it's time for some costly roof repair work - which, by the way, may well cost more that the average roof repair/replacement. All for the sake of "giving back" to the environment, or replacing the CO2 that the building's footprint took from the land it sits on. It's the way the world works today; auto, oil, banking, and every other industry, including the green industry, have been spinning their PR magic for years but as long as tax payers are not footing the bill there is no problem.

Similarly, commercial "green walls”, though admirable for the heat gain reductions to the building envelope it will bring, may cost more than the very simple and zero maintenance solution of simply designing buildings with an "outer skin" that "floats" (is suspended) a foot or so away from the face of the building, providing a thermal break. Essentially a giant shade that air can flow behind so that no heat gain is realized by the actual building envelope.

The ARK in Berea Eco-Museum living green wall is a residential example done in a cost effective manner that is a good solution for preventing houses from heating in summer and does not require substantial life-time maintenance costs, and a added incentive is that it is quite attractive.

The plant primarily used in the ARK in Berea Eco-Museum living wall is English Ivy and are about 25 years old.
Characteristics of English Ivy Plants: Taxonomy classifies English ivy plants as Hedera helix.
English ivy plants can act as ground covers, spreading horizontally and reaching 8" in height. But they are also climbers, due to their aerial rootlets, which allow them to climb to heights of 80' or more. They will eventually bear insignificant greenish flowers but are grown primarily for their evergreen foliage.

Simple Care for English Ivy Plants:
Their ability to grow in shade has made English ivy plants a traditional ground cover for problematic areas where most plants do not grow well. Their vigorous, dense grow habit makes them an effective ground cover where the object is to crowd out weeds. On slopes, they can be used for erosion control. The advantage of ivy vines climbing ability makes them excellent for ‘living walls’. In the Christmas carol, "The Holly and The Ivy," we see a symbolism with these two evergreen plants can be cut and used for natural Holiday decorations too.

ICEA Cleveland Ingenuity: Green Walls Would Make Great Highway Sound Barriers.
I think some civil engineers really need to pick up on this. The ICEALITY is that if they incorporated these into the sound barriers that ran between busy highways and city neighborhoods, it would be a beautiful feature that would help clean up the air and cancel out noise quite well. This is really a good idea, sometimes simpler ideas are the most effective.


http://landscaping.about.com/cs/lazylandscaping/g/planttaxonomy.htm
http://en.wikipedia.org/wiki/Green_wall
http://www.usgbc.org/leed/
http://www.klimahaus-bremerhaven.de/
http://www.TheICEA.ComHow did the plain green lawn become the central landscaping feature in America, and what is the ecological cost?  https://longreads.com/2019/07/18/american-green/
Posted by Ambassador Renate at 5:07 AM

nice blog we are company which offers Green Walls in Thane