The Beginning of Greater Cleveland's Sustainable Movement can be traced to a rustic community fire pit at the ARK in Berea Eco-Museum., Ohio. 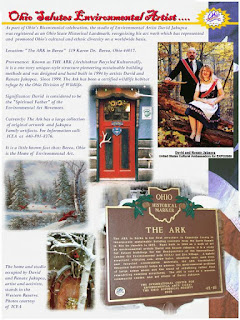 The beginning of North East Ohio's Sustainable Movement and Sustainable Cleveland can be traced to a rustic community fire pit at the ARK in Berea, Ohio.

PARADISE FOUND:
Around the mid 1970s, a distinctly off-center collection of counter culture hippies, agrarians, artists, musicians, anarchists, philosophers, immigrants, nudists, students, writers, and some vegetarians started to assemble an informal Salon around a primitive campfire in the woods up the banks of the Rocky River in Berea, Ohio. These Salons by the campfire, were hosted by the Jakupca's partly to amuse one another and partly to refine the taste and increase the knowledge of the participants through conversation followed by action. 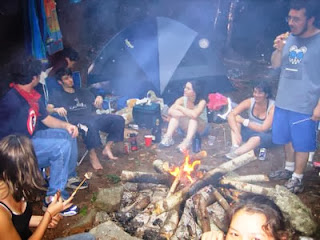 David and Renate Jakupca, welcomed into their woods these social refugees, some staying for only a day, some for years, but always around the Fire. Meanwhile, the campfire reputation as an avant-garde cultural center continued to grow, drawing the likes of sculptor John Puskas, adventurer poet Daniel Thompson, activist Ione Biggs, and environmentalist John Perera, writer Barb Sherwood, socialite Pat Hitt as well as other members of the international community. This fringe establishment became a lay convent for free thinkers and international intellectuals seeking connections between humankind, nature, culture and the universe, where, later in 1987,  David and Renate created the 'Theory of Iceality on Environmental Arts" and formed the International Center for Environmental Arts (ICEA) organization (http//:www.TheICEA.com) 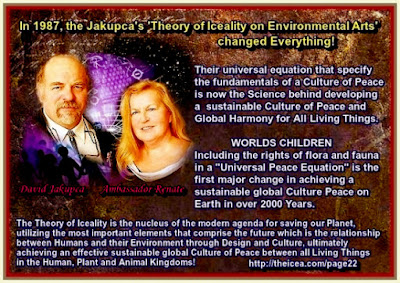 The Science behind Peace and Global Harmony is the "Theory of Iceality on Environmental Arts". Developed in 1987, it is the practical study on the aesthetics of the relationship between Humans and their Environment through Arts and Culture, ultimately promoting an effective sustainable global Culture of Peace between all Living Things ~ Human, Plant and Wildlife Kingdoms! The incorporation of the rights of flora and fauna in a "Universal Peace Equation" is the first major change in achieving a sustainable global Culture Peace on Earth in over 2000 Years. http://theicea.com/page22


One of the main benefits of the campfire was transformation. Another was connection. From ancient times, the simple act of gathering with others around a fire changes you…..and your way of thinking. There’s something about the Fire that connects us with the Universe around us in a way nothing else can. You bring your distractions, confusion and problems to the Fire, and somehow they burn away and become a little clearer and may even resolve of their own accord. Others may be able to assist you or you may be of help to others in clearing up everyday distractions. You stop pushing against life and begin, and like a small stone in the river below, to let life move you to the place where you belong..
Our camp fire was carved out of the side of the cliff where a little ledge had developed and formed with field stones found in the area. For years, it was used primarily as a camp fire and a part time cooking fire. It did not take long to figure out that the need to re-think this idea --- a campfire needs to be hot and blazing to work well while a cooking fire works better when there is no flame just hot coals. Also, in the wintertime, when the campfire was blazing, the people in front were roasting hot while the people behind them were freezing cold. Worse yet, if someone up front moved to much, they pushed the people behind them back until rear people would start to fall off the ledge. Sometimes usually when alcohol was involved they simply fell off by themselves. 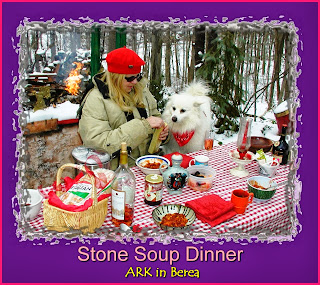 After a few years, a new safer fire pit site was built further up and the old one became primarily a cooking fire. ‘Anything with a bone’ was usually on the roasting menu, and the weekly Stone Soup meals could include almost anything…even road kill. But over the years, the sides of the mud cliff kept on falling down and it became too dangerous to walk down the path to the Main Scenic Route MSR. So, cement steps were added, a retaining wall was built and now after 37 years, and in 2013 the ole’ campfire pit is being made into a cement puddle. A new wood burning stove will have to be built for cooking, maybe something along the lines that Alex Bevan uses. 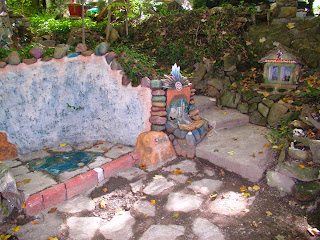 The ARK in Berea Eco-Museum is now a member of the
Northeastern Ohio Inter-Museum Council.

Reference Links:
As part of the Iceality Silver Revelation, North East Ohio Area has been 'branded' as the Home of the Environmental Art(s) Movement by the International Center for Environmental Arts (ICEA)     http://theicea.com/page25


Posted by Ambassador Renate at 8:50 AM

Hi there! Do you use Twitter? I'd like to follow you if that would be okay. I'm absolutely enjoying your blog and look forward to new posts.