World Peacemakers Hall of Fame: The History of Peace Makers 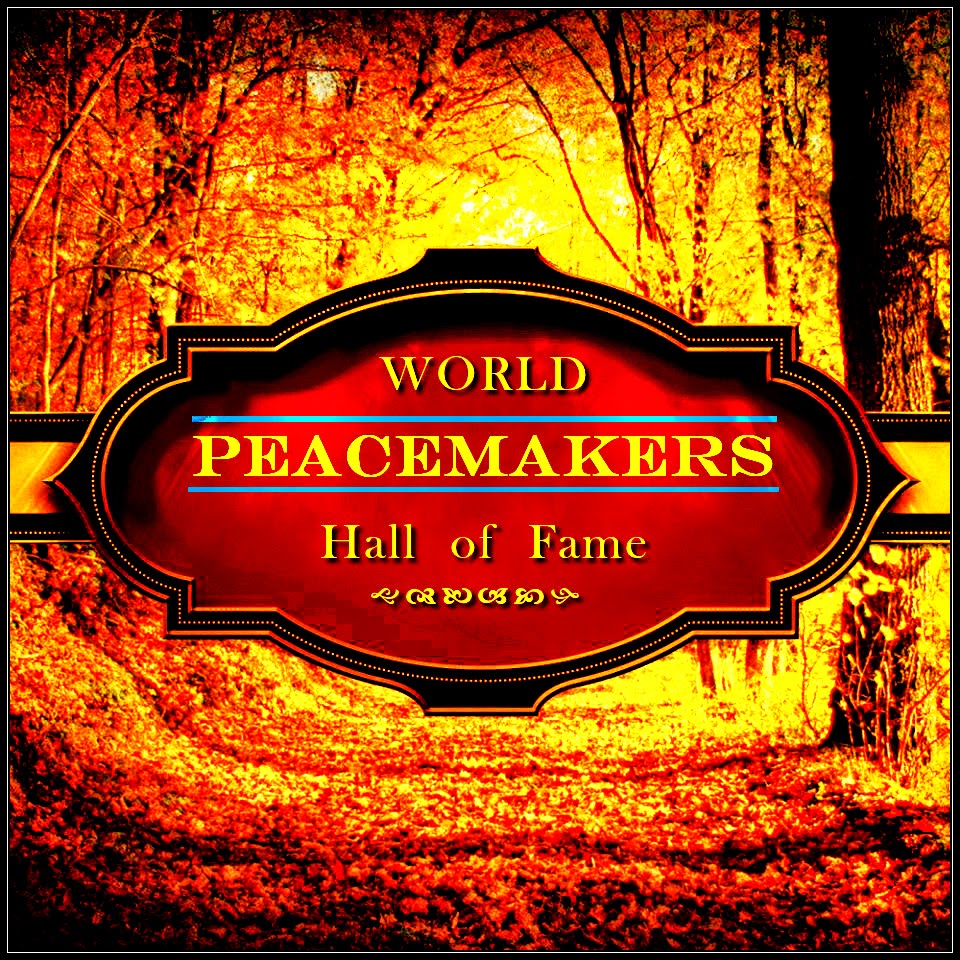 During years of leadership and resistance against the British colonization of the Indian subcontinent, Mahatma Gandhi's beliefs never wavered on nonviolence. Gandhi's philosophy on nonviolence was his trademark: "Nonviolence is the greatest force at the disposal of mankind. It is mightier than the mightiest weapon of destruction devised by the ingenuity of man." He stood firm in his beliefs on nonviolent protest (i.e., passive resistance including hunger strikes) and religious tolerance. When Hindus and Muslims committed acts of violence, whether against the ruling British (or against each other), he fasted until the fighting would cease. He was imprisoned many years for treason against the British Crown. Well-versed in yoga and meditation, he used his mind to not only endure, but conquer his imprisonment. Starved for extensive periods of food, drink and human companionship, he learned to stay alive and not give in. The British, in a struggle to hold on to a valuable colony, wanted him to publicly recant his beliefs in the cause of Indian freedom and cease his resistance efforts.

The British finally relented (in 1947), not to a military victory, but over-overwhelmingly to a triumph of the human will. Subsequently with independence, the countries of India and Pakistan were born--with Gandhi emerging as a hero and father of a new Indian Nation.

Nelson Mandela spent most of his life as a prisoner of the government of White-apartheid South Africa for acts of sabotage and treason (the usual reaction of an occupier to dissent). He often gazed at the ceiling of his cell and imagined tropical islands and women among the paint splotches and cracks. Such things occupied his mind and retained his sanity. Many hunger strikes and silent days blended into a 30-year ordeal of imprisonment. Times changed and the overriding bloodbath of whites vs. blacks never occurred as cooler heads on both sides prevailed. Mandela was released in 1990 and went on to assume the presidency of a new biracial republic. Mandela's accomplishment of reconciling whites and blacks in one of history's most cruelly divided nations is a phenomena of almost miraculous success.

He was not a perfect man or a saint. But when he got behind the podium the World changed. Like Jesus, he brought the poor and disenfranchised the one thing they really needed--HOPE. We knew already that what he said was true--everyone knew deep inside that all races and ethnicity's were equal in front of man and G-d. He taught us that to sustain racism was to deny our own intelligence, to deny humanity itself. And yes, the government stalked him and called him a communist, but he was a man beyond political systems and the facades of society. The assassin's bullet could not quiet THE DREAM. But with freedom comes a responsibility to improve society and stamp out hatred. If King were alive today, he would be concerned about our world. How the minorities fight the wars that only the rich benefit from. How the last presidential election went down. The death of the middle class in America. I dreamed of Dr. King and saw tears in his eyes.....

President of the Arab Republic of Egypt 1970-1981. Sadat was a man of great vision. He laid a foundation for peace in 1977 when he paid a historic visit to Jerusalem; paving the way for Egyptian-Israeli negotiations which culminated in the Camp David framework for peace in the Middle East in 1978. This framework led to the 1979 Egyptian-Israeli peace treaty by the virtue of which Israel withdrew from Sinai to begin the establishment of peace in the region. The two countries then established diplomatic relations in 1982.

Killed by an assassin's bullet, all can agree that the Middle East and the world need more great leaders like President Mohamed Anwar El- Sadat.

Jimmy Carter  Thirty-ninth president of the United States, served as president from January 20, 1977 to January 20, 1981. He championed human rights throughout the world. Significant foreign policy accomplishments of his administration included the Panama Canal treaties, the Camp David Accords, the treaty of peace between Egypt and Israel, the SALT II treaty with the Soviet Union, and the establishment of U.S. diplomatic relations with the People's Republic of China.
In 1982 he founded The Carter Center. Actively a nonprofit Center that addresses national and international issues of public policy. Carter Center fellows, associates, and staff join with President Carter in efforts to resolve conflict, promote democracy, protect human rights, and prevent disease and other afflictions. President Carter and The Carter Center have engaged in conflict mediation in Ethiopia and Eritrea (1989), North Korea (1994), Liberia (1994), Haiti (1994), Bosnia (1994), Sudan (1995), the Great Lakes region of Africa (1995-96), Sudan and Uganda (1999), and Venezuela (2002-2003). Through the Global 2000 program, the Center advances health and agriculture in the developing world.

In September 1978, Leonard Brezhnev, head of the Soviet Union, made a minor decision that would start a fundamental shift in the history of the world. Brezhnev's careful compromise in appointing Mikhail Gorbachev to the governing Central Committee would eventually lead to the peaceful break-up of the Soviet Union, ending the Cold War. Gorbachev, unknown at the time, was very different from his "old guard" peers on the Committee. Gorbachev was young, energetic, and an idealist.

The political structure of the Soviet Union was the result of the influence of Joseph Stalin. Stalin took the political system unleashed by the communist revolution of 1917 and turned it into a killing machine built on a political system of socialist conformity. Stalin's firm hand suppressing the people survived his death. The breakup of the Soviet Union and the release of the Eastern Bloc countries were inevitable--given the economic failure of the Soviet system in the 1970's and early 80's. The Soviets had fallen far behind the West in economic development.
Gorbachev had absolute power because he was the supreme leader of the Soviet Union and Communist Party. He had a great desire to reach the common people and have a dialogue with them. He realized that "Perestroika", the process of change, must be started from above--but the common people must be taught about democracy. Gorbachev went through towns and villages carrying his message of change. He promoted idealists like himself to the higher levels of government. One of these idealists was Boris Yelsin who went on to initiate Russia into democracy and lead the early Russian Republic.
Gorbachev guided the Soviet Union and the release of the Eastern Bloc countries through a bloodless transition from communism to democracy. This massive achievement qualifies Mikhail Gorbachev as one of the greatest peacemakers of the 20th Century.

The efforts of Lech Walesa, leader of Polish Solidarity (the early union movement in communist Poland), culminated in the achievement of the "Gdansk Agreement" (ratified October 9, 1980) which prepared the way for the Solidarity movement's legalization. Walesa accomplished this through leadership, organizational abilities and a series of "illegal" labor strikes. However, the following December, the Solidarity movement was crushed by the communist Polish militia and Walesa (and others from the movement) were imprisoned.

By the tenth anniversary of the "Gdansk Agreement", Walesa was out of prison and communism in Poland was faltering (as well as in all of Eastern Europe and Russia). Walesa's primary biographer tributes him as "an epochal figure, who shaped a country's struggle for sovereignty and freedom, played a central role in the collapse of communism and established the contours of his country's new vibrant democracy and free market economy."
Lech Walesa achieved great goals through peaceful ideas.

LEO TOLSTOY
Author of War and Peace, Tolstoy is considered one of histories greatest thinkers on the issue of World Peace. He wrote many articles on the subject of peace -- some involve actual letters from soldiers seeking advice. His message to soldiers still rings true: "You are a soldier...you have been brought to 'pacify'...it has been instilled in you that you are not responsible for the consequences of your shots. But you know that the man who falls bleeding from your shot is killed by you and by no one else..."
Tolstoy believed that "Armies will only be diminished and abolished when people cease to trust governments, and themselves seek salvation from the miseries that oppress them, and seek safety, not by the complicated and delicate [efforts] of diplomats, but in the simple fulfillment of that law binding upon every man, inscribed in all religious teachings, and present in every heart, not to do to others what you wish them not to do to you-above all not to slay your neighbors." (1896) 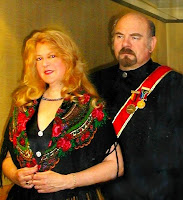 
Builders of the "Worlds Children Peace Monument"  (WCPM) and the "Great American Peace Trail".  The noted Cleveland  husband and wife team are recognized for their pioneering work in the Environmental Art Movement to help create a more sustainable, equitable and peaceful World in modern times. Through their international advocacy and educational activities promoting from a cultural perspective, the Jakupca’s have contributed to the revitalization of cultural and environmental diversity, and the strengthening of local communities and economies worldwide. In 1987, by founding the International Center for Environmental Arts (ICEA) at the historic ARK in Berea, they have combined their expertise in ecology, art and culture to really unravel the evolutionary dynamics of humanity. Their original 'Theory of Iceality on Environmenta Arts' , is the first fundamental change in developing a Culture of Peace in over 2000 years. The Theory underscores Nature's view about the integrative universal process of freedom and is the first to connect not only Man, but all Living Things (Human, Plant and Wildlife Kingdoms) to achieving a sustainable global Culture of Peace."

MOTHER TERESA
In the early stages of her life, she was fascinated by the stories of missionaries. At the age of 18, she joined the Sisters of Loreto in Calcutta (Now, Kolkata) in order to start the charity works and spread the message of love in the world. Sister Teresa became Mother Teresa on 24th May 1937. She taught from 1931 to 1948.

The condition of the poor people outside the convent school where she was teaching were utterly bad. It, indeed, hurt her very deeply. She understood the need of the hour to help the destitute. With courage and divinity, she had started an open-air school for the slum dwellers of Calcutta. She did not stop with the service of teaching the poor children. She had also taught the adults and gave medical treatments to the ill patients by providing the basic amenities such as hospitals and clinics. She has been better known for starting off “Missionaries of Charity” with her pupils. Shishu Bhavan, establishment of center for AIDS patients and many Homes had also been started for the orphanages. Her service is still being followed in many parts of the world. She is an ideal person to be a good social worker and set as an example to the entire world as the icon of peace and love.

Mother Teresa is one of the greatest human beings of all time! A gift for the poor and destitute. She had received many high profiled awards. Some of them were:
* Padmashree award in 1962
* Nobel Peace Prize in 1979
* Bharat Ratna in 1980
* The Pope John XXIII Peace Prize
* Order of Merit from Queen Elizabeth
* Medal of Freedom

JOHN LENNON
He rests in Strawberry Fields,
A victim of a single madman,
Tied to a single bullet.
He said "give peace a chance,"
But they continued to fight,
And die.
He hated violence,
But in the end it consumed him,
Like the fire of lit match,
To the unwinds of a rope.
But he saw above the eyes of most men,
That war was a waste of time, lives,
And energy.
And an unsettling feeling,
That all war will end,
When the last human,
Takes his final breath...

Posted by Ambassador Renate at 10:46 AM No comments: