Fourth of July Peace Message from the ARK in Berea.

ARK in Berea News- Two hundred thirty two years ago, 55 men from 13 Colonies signed our "Declaration of Independence" and so began our United States of America. We consider the 4th of July to be one of the most meaningful and significant of American holidays because it celebrates the fundamental principles upon which our nation was founded.
The Declaration begins with the explanation that "When in the Course of human Events...", it becomes necessary for people to separate themselves from despots and declare their independence and freedom, it is necessary to set forth the reasons why they are compelled to take such action. "We hold these Truths to be self-evident, that all Men are created equal, that they are endowed by their Creator with certain unalienable Rights, that among these are Life, Liberty, and the Pursuit of Happiness." Those immortal words begin the second paragraph of the Declaration. Equality, Unalienable Rights such as Life , Liberty and the Pursuit of Happiness thus became our nation's raison d'etre.
The signers set forth, in 27 separate paragraphs, a long list of grievances against the King of England. Included in the indictment are: obstruction of the Administration of Justice, quartering of armed troops in the colonies without consent, imposing taxes without consent, exciting domestic insurrection and waging war against the colonies.
Reasoning that " in every stage of these Oppressions we have Petitioned for Redress" but to no avail the signers believed they had no choice. As they so eloquently stated: " We, therefore, the Representatives of the United Staes of America, in General Congress, Assembled, ... do, in the Name, and by Authority of the good people of these Colonies, solemnly Publish and Declare, that these United Colonies are, and of Right ought to be, free and independant States ; that they are absolved from all Allegiances to the British Crown, and that all political Connection between them and the State of Great-Britain, is and ought to be totally dissolved; and that as free and independant States, they have full Power to levy War, conclude Peace, contract Alliances, establish Commerce, and do all other Acts and Things which independant States may of right do."
On July 4,1776, 232 years ago, the United States of America was born.
On September 17, 1787 our Constitution was approved by a Constitutional Congress made up of representatives of the 13 original colonies of New Hampshire, Massachusetts, Connecticut, New York, New Jersey, Pennsylvania, Delaware, Maryland, Virginia, North Carolina, South Carolina and Georgia. Four years later, on December 15, 1791, our Bill of Rights –the first ten amendments –became part of the Constitution.
Today, as we approach our 232nd birthday, it is important for all Americans to reflect on our heritage and to appreciate our constitutional system. Although they have some serious flaws, these documents collectively set forth wonderful and fundamental principles and values that our nation needs to adhere to more consistently. Our late mentor, Ione Biggs, a superb civil rights advocate from Cleveland, and a great American always said that if we only adhered to the principles and values in our constitutional system, our nation would be much better. She believed that no matter what problems arose, these American guidelines provided the way for resolving them as a nation. Ione was correct.
This 4th of July, we along with other family's from other civic minded groups will come together and celebrate our American treasures. The celebration will be sponsored by the International Center for Environmental Arts and held at the Worlds Children Peace Monument (WCPM) in Coe Lake Park during the Berea Grindstone Festival, at noon.
I invite you to join us and to share in this wonderful peace experience.
The 4th of July, Grindstone Festival, people celebrating the principles central to free speech, freedom of religion, freedom of the press, equal protection under the law, due process of the law and other milestones of American values–it will make you feel good. It is a message Americans need to absorb.
Have a Safe and Happy 4th of July.
Peace Friends on Independence Day.
American Cultural Ambassadors,
David & Renate Jakupca

The historic home and museum of
American Cultural Ambassadors David and Renate Jakupca.

Summary:     A.R.K. stands for - Architektur Recycled Kulturstall.
The historic A.R.K. in Berea is the first structure in Cuyahoga County, Ohio to incorporate sustainable building concepts from the Earth Summit in Rio de Janeiro in 1992.  Hand built in 1994 as a work of art by Environmental Artists David and Renate Jakupca. It is a practical design study for the 'Theory of Iceality in Environmental Arts' for future buildings and for the global headquarters of the International Center for Environmental Arts (ICEA) and Cleveland’s Eco Village.  It is also a pioneer structure for the Leadership in Energy and Environmental Design (LEED) Certification developed by the U.S. Green Building Council (USGBC) in 1998.
The A.R.K. is hybrid structure utilizing cob, straw bales, aluminum cans, used tires, and recycled construction materials, It helped to address the environmental problems through 'iceality' of large urban areas and the trend of rebuilding rather than remodeling existing structures. The ARK in Berea is used as an eco-museum, community center, and art studio of American Cultural Ambassadors David and Renate Jakupca. It is recognized as the 'Home of the Environmental Art Movement and is registered with the Berea Historical Society, Western Reserve Historical Society and the Ohio Historical Society.

STILL AMAZING NEWS:  :  5 years ago in Geneva, Switzerland the International Center for Environmental Arts (ICEA) received another award by the United Nations......... We were very honored that the United Nations recognized our Co-founders, American Cultural Ambassadors David and Renate Jakupca with the award on behalf of the Worlds Children Peace Monument (WCPM) and for continued peace advocacy efforts in the last 20 years.

Really a BIG THANK YOU to every single team member involved in the Worlds Children Peace Monument (WCPM) Project, our families, activists in our clubs, board, partners, founding partners and all our supporters everywhere around the World. IT CANT GET ANY BETTER!!! 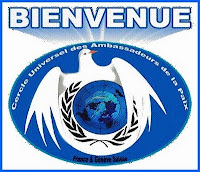 Posted by Ambassador Renate at 6:50 AM No comments: